Germano Ovani graduated in Painting from the Academy of Fine Arts in Urbino, Italy, and obtained an MA in Children’s Book Illustration from the School of Art in Aberystwyth, University of Wales.

He worked for over ten years as a freelance illustrator of books for children and young adults, producing over 30 collections with various publishing houses around the world.

Alongside his career as an illustrator, he has been working for the last 15 years as a Teacher of Art & Design in both Italy and the UK.

In 2014 he began a painting journey inspired by black and white photographs and aimed at investigating the relationship between reality and fiction. 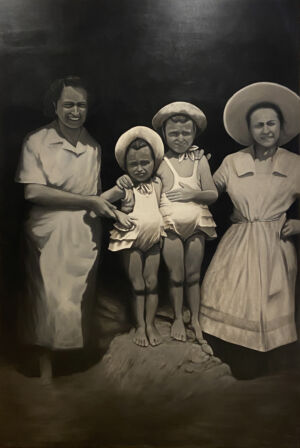 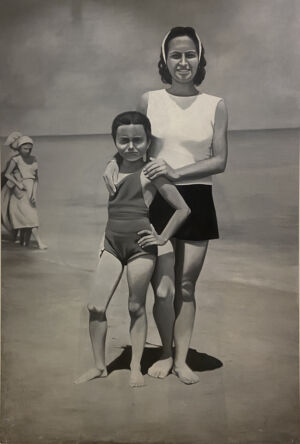 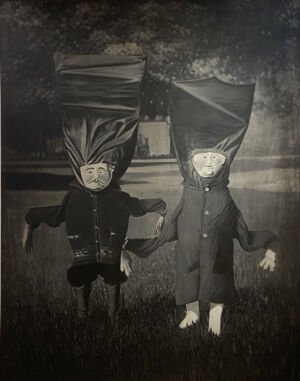 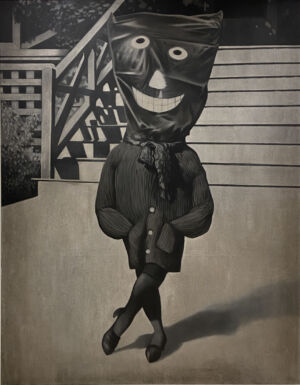 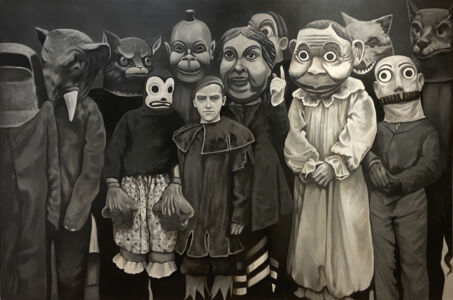 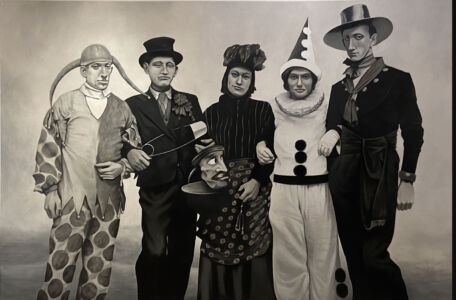 The main subject of the work presented is the relationship between reality and fiction.

The interest in this subject was born around 2012, when after ten years of working as an illustrator of children’s books, I decided to devote myself to painting and subjects towards which I felt more empathy from a creative point of view. Initially I reproduced, with oil paintings, some black and white photographs belonging to my family members, deepening my ability to work on memory and the sense of belonging to a family, a history and a specific culture.

The fascination for images from the first half of the 20th century lies in the fact that they belong to a time when people chose their best dress to face the photographer, and froze for a few seconds to allow the light to record the image on the film. The idea of spontaneity was practically absent, or in any case very difficult to maintain. In short, a completely different idea of photography from the one we are used to today. This new path also coincided with my return to Italy after ten years of living in Scotland.

Together with the nostalgic content towards an Italy of the past. and towards my culture of origin, in this path there was also the need to move away from the creative practice that characterized the years of my work as an illustrator. During those years the constant effort was to create fantastic but at the same time credible imaginaries, respecting the narrative suggestions of the text to be illustrated. On the contrary, not having to invent anything anymore, not having to worry about composition, narration or colors, suddenly meant the pure freedom of focusing exclusively on painting. This is painting as a gesture that replaces thinking because “painting has nothing to do with thinking, because in painting thinking corresponds to painting (.) in painting each form is a response to another; and so on. ” (G.Richter)

I later felt that these early realistic works lacked precisely that which I had attempted to move away from: the fantasy component that had characterized my ten years of work as an illustrator. I therefore gradually began to progress from my family’s photographic repertoire to black and white photographs that still had a “surreal” or fantastic component, such as photos of children dressed up for Carnival or Halloween. I am fascinated by the fact that these images look like pictures taken from a fantasy world, but are photographs of real moments.

So, it is as if I were following an inverse path to what I had been doing as an illustrator, that is, where before I created fantastic situations with the aim of making them credible and coherent within an imaginary world, I now returned to images that, although coming from reality, were difficult to associate with the everyday and credible images of the real world.

Another element common to many of the exhibited artworks is the attention to the mask, intended both as a playful and desecrating artifice of reality in a traditional festival context (Carnival, Halloween etc.) as much as in the Pirandello sense, which means as an automatic defense mechanism. or rather as a protection that we as individuals adopt in relating to the other. This sometimes occurs consciously, but more frequently it is an unconscious and spontaneous mechanism.

On a social level. in recent years this mechanism has been further strengthened due to preventive measures aimed at stemming the spread of the Covid19 virus. Social distancing and the use of masks have become part of our daily behavior, conditioning our way of relating to “the other”

“I wish everyday could be Halloween. We could all wear masks all the time. Then we could walk around and get to know each other before we got to see what we looked like under the masks. (From the novel “Wonder” by J.P.Palacio) 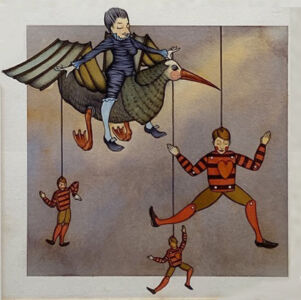 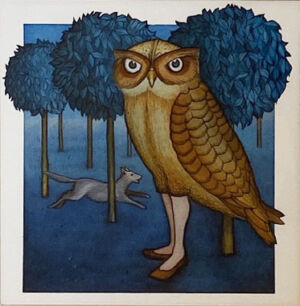 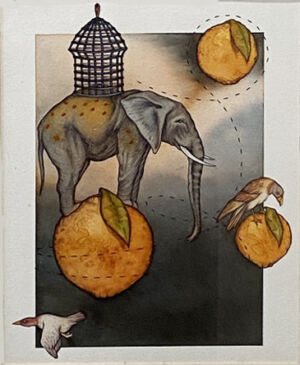 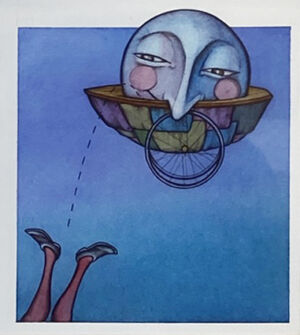 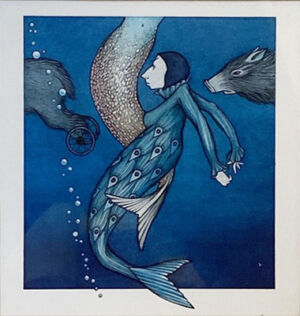 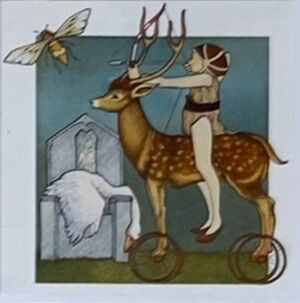 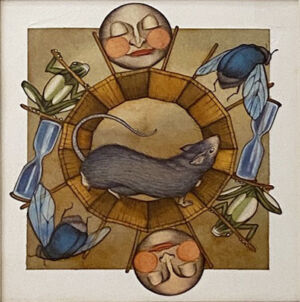 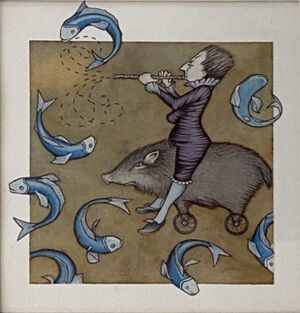 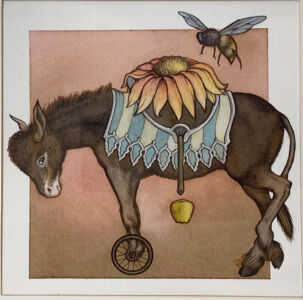 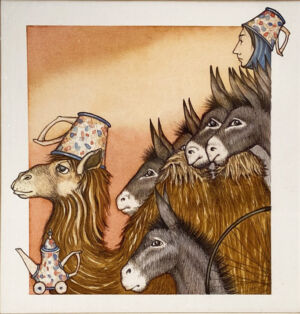 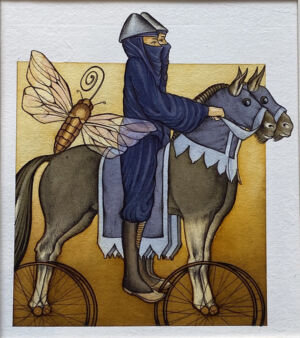 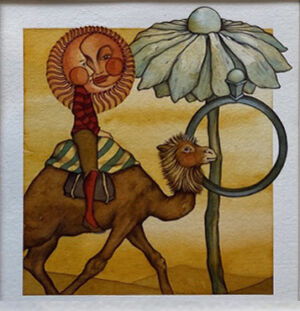 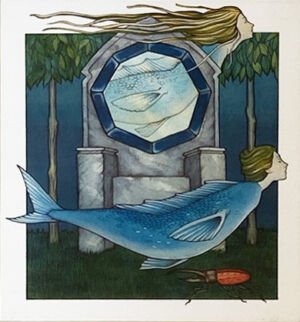 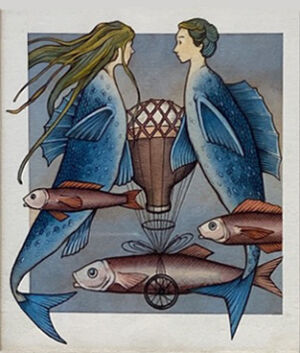 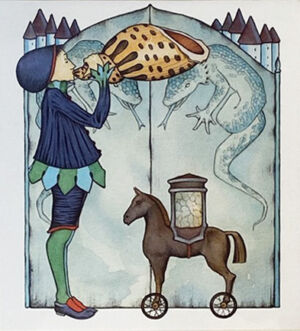 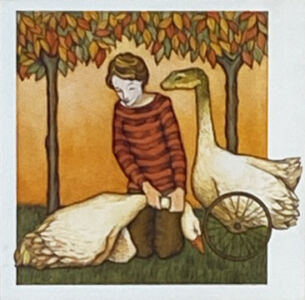 Riccio Gallery is delighted to be presenting Germano’s original watercolour book illustrations. Each is £140 and is unique. They are presented in temporary frames, mostly in pairs. If you wish to have Riccio Gallery reframe them to suit your décor, we will be happy for you to select whichever pairings or individual images you wish.